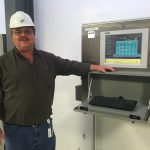 Of his experience collaborating with SCADAware’s engineers, Brian Tucker, Operations Supervisor of SCWRD’s Spring Creek facility, had this to say:

SCADAware was an invaluable part of our team in optimizing operational performance with automation technology at our new plant. From an operational standpoint, our challenge in building a new facility that would double our capacity was to find a way to get it done without simply doubling everything—labor, energy cost, etc. We needed to build a smarter plant. SCADAware’s expertise in SCADA systems and integrating many different types of technologies exceeded our expectations.

…uses labor efficiently. The Spring Creek facility uses a crew of seven operators and two head operators for the first two shifts. The SCADA system runs the third shift. Using the old system, this facility would have required an operating crew of at least 28.

…empowers operators to report effectively. It is now cost effective for operators to collect large amounts of data for “just-in-case” scenarios. Reports can be built with just a few clicks. The SCADA system also generates reports automatically at the end of each month, which makes mandatory reporting to the U.S. Environmental Protection Agency (EPA), Illinois EPA, and SCWRD’s trustees simple. In addition, the system reports once per minute on dissolved oxygen (DO) levels for water entering the Sangamon River, far exceeding the State’s current reporting regulations and anticipating future requirements.

…saves energy. SCWRD is running a plant twice its original size but with a slightly lower yearly energy bill than before the rebuild.

…comes packaged with unparalleled support. SCADAware has an ongoing support and service contract with SCWRD. Using SCWRD’s administrative network, SCADAware programmers are able to log in to a terminal server on the plant network to diagnose and correct problems with the SCADA system.