Let us help you automate and streamline your manufacturing process

An energy monitoring system was built by SCADAware to track the consumption of electricity, gas, air and steam at a tire manufacturing facility. The SCADA computer was connected to 263 power monitors throughout the plant by means of RS422 serial lines, protocol converters, and an Ethernet. The system objective was to provide enough data to aid in the reduction of energy costs by $500,000 annually. According to plant management, each year since system implementation in 1995, energy costs have been reduced in excess of $1,000,000.

SCADAware engineers produced a SCADA system with four servers and 20 display clients on a Local Area Network (LAN). This system communicates with 370 Mitsubishi PLC’s, and gathers approximately 40,000 I/O points for monitoring and reporting shop status. The network combines three levels of communications networking. Data is transferred from a token passing deterministic PLC network to PLC data concentrators and from there serially via RS422 to the SCADA servers. The SCADA servers are on a combination cat 5 and fiber optic 100 mega-bit Ethernet designed and installed by SCADAware’s founder. This system was the first Citect system in America and was originally built with Citect for DOS during the period from December 1990 to November 1992, then later upgraded to Citect for Windows. This was thought to be the largest PC based SCADA system in the world at the time due to the number of PLCs attached to a single database SCADA system

SCADAware engineered a sophisticated cell control system for a heavy equipment manufacturer. The Cell controller and each machine’s local control is accomplished with Steeplechase VLC, PC based control software. Each Machine Control VLC computer communicates with the Cell Control VLC computer via Berkley Socket routines on an Ethernet below the firewall (outside of Windows). Motion control is with MEI cards in the VLC computer. This Cell has the ability to produce axles from 11 inches long to 15 feet long and ¾ inch in diameter to 6 inches in diameter. Materials are run in this Cell from a recipe interface and Cell data is stored in an Oracle database for historical analysis.

Systems were built by SCADAware for an earth moving equipment manufacturer with multiple facilities, in different cities. Standards and specifications were developed by SCADAware to create a common look and feel for all plants, even though the functionality was very different at each location. These standards also allowed for all systems to be combined into a single system at a corporate location, giving users there the ability to monitor all plants by means of their WAN and remote connectivity. Data varies from Wash Booth monitoring to aid in a paint quality initiative, to Overall Equipment Effectiveness (OEE) reports to improve machine utilization and throughput. 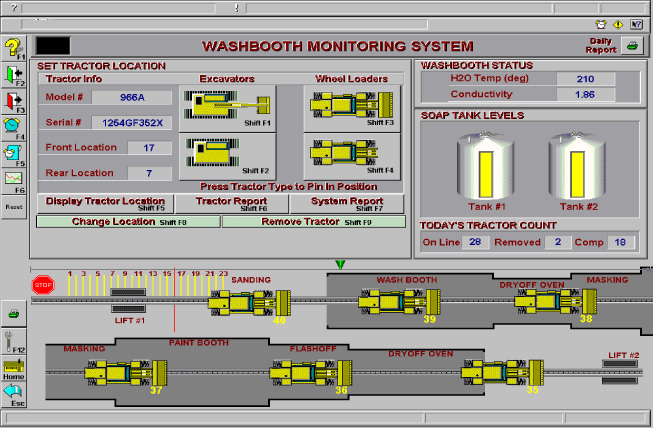